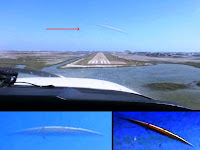 Eddie Miles, a pilot from San Antonio, says he never actually saw the strange object until he later looked at photos his passenger took during their descent into Port Aransas on Sunday, March 17, 2013.