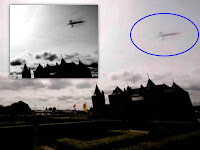 On May 25, Corinne Federer and her mother visited the Muiderslot Castle, built in 1285 near Amsterdam in the Netherlands.

Federer and a photographer, was shooting High Dynamic Range, or HDR, photos of the castle. Literally faster than the eye could follow, an unusual object was accidentally photographed above the Castle.

It was a tubular-shaped object that had an S-shaped fin on it.

If it had been any type of missile, it would've had multiple fins, but facing the same direction. Federer said: "We heard nothing, it was completely quiet out". Read full article - More photo's