UFO appears above largest refinery in the world - February 2013 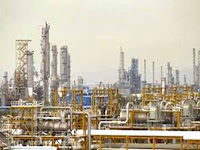 More than two weeks ago appeared above the largest oil refinery in the world a mysterious glowing object.

A mysterious illuminated object appeared without warning in the dark sky above the world's largest oil refinery in Jamnagar, Gujarat. It circled over the complex before disappearing just as suddenly as it had appeared.

Three days later, the object returned, this time a little after dawn. This time, the process cameras at the Reliance Industries Ltd refinery managed to take a few pictures of the object. It was bright and spherical.

RIL has reported the sightings to the government, along with the pictures. The Air Force, Navy and Coast Guard have been put on alert, and the defence ministry is beefing up security for the refinery, sources said.
The incidents are being kept a tightly guarded secret. There is no firm assumption yet on what the object might have been.

The refinery is located on the Gulf of Kutch, close to the Pakistan border, and has long been seen as a potential target for a terror attack from both air and sea. The Jamnagar refinery's two units have the capacity to process 62 million tonnes of crude annually, which is 27 per cent of India's total refining capacity. An incident at the refinery complex would significantly affect production of oil and cooking gas.

Despite the danger, the refinery continues to be protected only by a 250-member commando unit of the Central Industrial Security Force which provides perimeter security on the side of both the sea and the city. Source: indianexpress.com