June 02, 2015
We received the following report from our long reader A. in which he informed us that between the period of 22th - 28th September 2015 we are going to see the start of something major for civilization as we know it or as he suspect.

After he has been putting pieces of the puzzle together in order to see the full picture, he discovered that actually all the signs are right in our face, yet many aren’t picking up on it!

So let’s begin and see how they all join together. 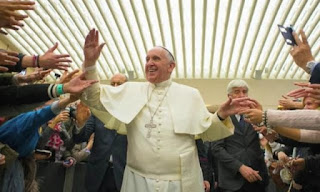 Pope Francis is to visit the US on 23rd September 2015. He will visit the White House and then address the US Congress on the 24th September. Could we be witnessing the prophet of the Anti-Christ, the false prophet?

On the 25th the Pope will address the US General Assembly in New York where he will unveil the Post 2015 Sustainable Development Agenda, in other words the NWO plan. This is primarily showing to be a great humanitarian plan to bring all the nations together as one and to stop poverty, famine and unite all of humanity. Although this sounds great there is a bigger agenda here.

As we all know the NWO is upon us and this so called innocent plan is the key to total control, one power to take over the world! The G20 will then look at uniting to create a global economy and creating equality in wealth across the board.

Will this mean people will be asked to sign an agreement to be part of this system, a system which seems to help everyone but will lead to our downfall? Is this the so called 'mark of the beast' and will we be deceived, if it sounds too good to be true then it probably is! If the majority sign up then we are giving all power to the NWO, who will have the opportunity to take control of our wellbeing, food, money, resources and so can bring us to our knees and we are powerless to stop it!

In these times of uncertainty with war, economy and climatic chaos many will be forced to look at the Pope and as the savior and we will bow to his plans, when we are at our weakest.

Let's also remind ourselves that we are told that this could be the last Pope, if this is true then we are nearing the end times or the end of a cycle.

How strange that with this in mind, this last Pope chooses to visit the US, a first in history! See Video 1 and Video 2.

This Hadron Collider is 17 miles long and runs 300ft below ground, the piping running circular between France and Switzerland.

What's interesting is that this will be running up again in September at it's most powerful level yet. Scientists and other experts have warned about the dangers of trying to create the god like particle and trying to rein act the big bang.

So much energy, more than that of the planet Earth could destroy the universe with the most violent of explosions! We are delving in to the unknown trying to act like God! See Video 1 and Video 2.

The CERN logo is 666 the sign of the beast in a circle.

The CERN collider looks like the all seeing eye or stargate we see so much of.

A statue of Shiva the Hindu God 'The Destroyer' is placed outside the entrance to the CERN building.

A huge LHC key was handed over to staff starting up the CERN systems again this spring.

Let me remind you that in the Bible it mentions that a star falls from heaven and unlocks the bottomless pit.

2015 is being labeled 'The year of light' a sign of Lucifer, interesting that this also links to an event created by the UN involved in the set up with the Pope. See Video.

Also interesting is the logo they use for this year of light which looks like the CERN collider, the all seeing eye.

EVENTS around the September period.

In this period are the Feast of Trumpets 13th September.

4th blood moon on the 28th September on the Feast of Tabernacles.

A total lunar eclipse will be seen by most of America, Europe.

25th September is the UN Summit for the Adoption of the Post-2015 Development Agenda. See Article.

Possible asteroid hitting Earth around this time and could be the cataclysmic event needed to push the NWO. See Video 1 and Video 2.

These signs are as known in the prophecy the start of the 7 years of tribulation.

Indeed, there are many signs referring to September. Also according to the more than 3,000 years old Hebrew mystery ‘Shemitah’, September will be a month in which certain things will collapse. See Video.

Our focus on the planet is connected to our very survival. We are on the edge of a climatic abyss. In fact, we have 500 days to avoid climate chaos, conference in May 2014. See Video.

Movies, TV shows, advertisements and other signs that are all pointing us to the time period between September 22-28, 2015.

Titles include Tomorrowland, Mission Impossible, Call of Duty Black Ops III, Mad Max. All are being used to condition using subliminal messages for the coming and acceptance from the masses of events that will unfold very soon.

Even LEGO, with their famous line of plastic construction toys and colorful interlocking plastic bricks comes with a new CERN toy.

Why is the New York Federal Reserve bank moving to Chicago, Illinois?

NY Fed Bank has been in NYC since 1914. In all of U.S. history, there has never been a natural disaster in New York City that would have been bad enough to totally shut down the operations of the New York Fed for an extended period of time.

What kind of natural disaster would be bad enough to completely shut down the operations of the New York Federal Reserve Bank? It would have to be something very unusual and ODD.

"The New York branch of the U.S. Federal Reserve, wary that a natural disaster or other eventuality could shut down its market operations as it approaches an interest rate hike, has added staff and bulked up its satellite office in Chicago." (Reuters) See Video.

The pentagon is slowing moving all their stuff to Cheyenne Mountains.

The large underground bunker was abandoned a decade ago, but this week the Pentagon announced that Cheyenne Mountain will once again be home to the most advanced tracking and communications equipment in the United States military.

The shift to the Cheyenne Mountain base in Colorado is designed to safeguard the command's sensitive sensors and servers from a potential electromagnetic pulse (EMP) attack, military officers said.

Yet the growing list of dead scientists and bankers,125 Scientists, 76 High-Level Bankers, with-in the last few years, so far..

And what to think about the ghost cities in china and Africa built by the Chinese Government the last years.

For example: In China we have the city of Ordos built for over a million people of Inner Mongolia. This futuristic metropolis rises empty out of the deserts of northern China and in the desert of Africa we have the new Angolan city Nova Cidade de Kilamba designed for 500,000 people but it has no residents. Why they built such large cities as no one will live there?

Yet Russia is on a fast track building their underground facilities for their people and the US government is making the same preparations but to protect the… elite.

A: “I know there is a lot more I've missed out and I find this a scary prospect as there is so much out there indicating we are starting something major this September. Please remind, the intention of this article is not to spread fear or to promote end times prophecy but letting people know what we might expect in September 2015. I recommend you to watch the videos, do your own research and decide for yourself if all signs indicate that something major is about to happen for our civilization.”