City of Heracleion sunk into the Mediterranean sea 1,200 years ago 2013 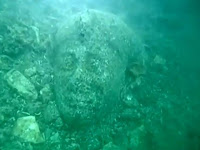 Heracleion was an ancient Egyptian city near Alexandria. It was known as early as the 12th century BC but its importance grew during the waning days of the pharaohs, the late period. Herakleion was Egypt's main port in the time of the pharaohs.

It was famous because it was believed that Helen of Troy and Hercules had visited the city, and that the city had even gained its name from Hercules. There was also a large temple dedicated to the Greek hero at the city center. Pharaoh Nectanebo made many additions to the temple in the 4th century B.C. In the 6th or 7th century A.D.

It sank, probably due to major earthquakes and floods. The ruins submerged in the sea were finally located and rediscovered by the French underwater archaeologist Franck Goddio in 2001.

In cooperation with the Egyptian Ministry for Antiquities and the support of the Hilti Foundation, the team has recovered important information on the city’s ancient landmarks, such as the grand temple of god Amun and his son Khonsou and the city’s harbours.

So far, 64 ancient shipwrecks and more than 700 anchors have been unearthed from the mud of the bay, the news outlet notes. Other findings include gold coins, weights from Athens (which have never before been found at an Egyptian site) and giant tablets inscribed in ancient Greek and ancient Egyptian.

Researchers have also uncovered a variety of religious artifacts in the sunken city, including 16-foot stone sculptures thought to have adorned the city's central temple and limestone sarcophagi that are believed to have contained mummified animals. Photo's at franckgoddio.org