Aliens surround the sun with a flotilla of solar-cells 2013 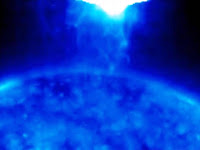 Now, in search of extraterrestrial intelligence, a team of astronomers at the University of Hawaii's Institute for Astronomy are seeking funding from private funders as they have planned to build a $1 billion megatelescope.

The telescope — called Colossus — would be a massive 250-foot (77 meters) telescope, which is more than double the aperture of any telescope yet constructed.

The sensitivity of the ‘heat-seeking’ scope, though, could be enough to spot cities or other signs of aliens for planets as far as 60 to 70 light-years from Earth.

The team builds on a concept first proposed by British physicist Freeman Dyson in the 1960s. Humans can capture only a fraction of the energy sent out by the sun, but a more advanced civilization would want to grab as much as possible.

Already in 1959, Dyson reasoned as follows: since we seem to have an insatiable hunger for energy, it makes sense to assume that aliens have the same. To satisfy their craving for kilowatt-hours, extraterrestrials who are centuries more advanced than we are will surround the sun with an orbiting flotilla of solar-cells, allowing them to capture a large fraction of their star's energy output.

With the modern techniques, satellites (SOHO, Helioviewer), advanced telescopes and cameras, we have seen many solid objects near the sun. These objects have different shapes, sizes and have a material structure and they are in different points in space near the sun. Some objects remain on the same position for many weeks.

There is massive fleet of UFOs operating near the sun, which confirm the existence of a certain civilization whose spacecraft are capable of resting extremely high temperatures, using their shields or ‘solar-cells’ to capture the energy they need for their spacecraft.

Hopefully, the team gets the funding it needs.

More information about this project:: space.com
Videos and photographs of  objects near the sun:  UFOs near the Sun