Government Disclosure and an end to UFO/ET secrecy is Top Priority!

Toronto (ZNN Press Room) University of Missouri-Columbia adjunct professor in Peace Studies Bill Wickersham has made a call for an unfettered study of the UFO phenomenon. Professor Wickersham joins the growing list of professionals, academics and former government and military officials seeking government disclosure and an end to UFO/ET secrecy.

Wickersham reveals a stunning yet little known fact that philanthropist Laurance S. Rockefeller – a member of the internationally renowned Rockefeller family – tasked and funded UFO investigator C. B. “Scott” Jones Ph.D. to travel to Europe, China, Russia and other countries to gather data from government officials and ufologists regarding UFO activities in their country.

Professor Wickersham also reveals that according to Jones, there are a large number of government whistle-blowers who have already come forward to reveal much about government UFO secrecy and the U.S. government’s direct involvement in the UFO matter. In a particularly disturbing manner, as pointed out in Wickersham's Daily Tribune article, insider C. B. "Scott" Jones is quoted as saying that counter-intelligence programs, threats of fines and imprisonment by the U.S. government await those in official capacities within government and the military who dare to speak the truth about the UFO/ET matter. According to Jones, these threats appear to be becoming less effective as more and more former military and government officials come forward - renouncing their oaths of secrecy to publicly address the UFO/ET matter.

Wickersham goes on to outline the academic, political, social and religious reasons why the academic community must orchestrate a planetary response to the UFO/ET disclosure and contact issue in an unbiased and unfettered manner.

Professor Wickersham now adds his voice to those of a growing number of academics, professionals and government officials calling for studies on the UFO/ET matter and an end to UFO secrecy. Read more

The UK Ministry of Defence began a campaign in 2008 to release all of their UFO files, a process which supposedly had come to an end in June, 2013. However, in a response to a letter inquiring about specific UFO files, the MOD says it is treating the letter as a Freedom of Information Act (FOIA) request, and as such has found the documents in question and will be releasing them. The FOI response says the files are being prepared to be released to The National Archives (TNA) of the UK, a process which may take 9 months.

The FOI response was released on September 16 as part of a weekly posting on the Ministry of Defence website listing FOI responses of the week. The document is titled, “Whether documents titled ‘UFO policy’ and 3 other documents still exist and if so are they still ‘classified’.”

The FOI response outlines that the documents were found and that they will be released to the TNA, making them available in about 9 months. The document also includes a table of the 18 documents to be released. They include several documents titled “Air Traffic Control Low Flying UFOs,” several others titled “ADGE UFO Reports.” and then, among others, the specific files requested. Read more

3. FBI document proves 'We are being visited by Aliens and they live here on Earth.'

A while ago the FBI uploaded an interesting pdf document on UFOs and Extraterrestrials on their website ‘The Vault’. 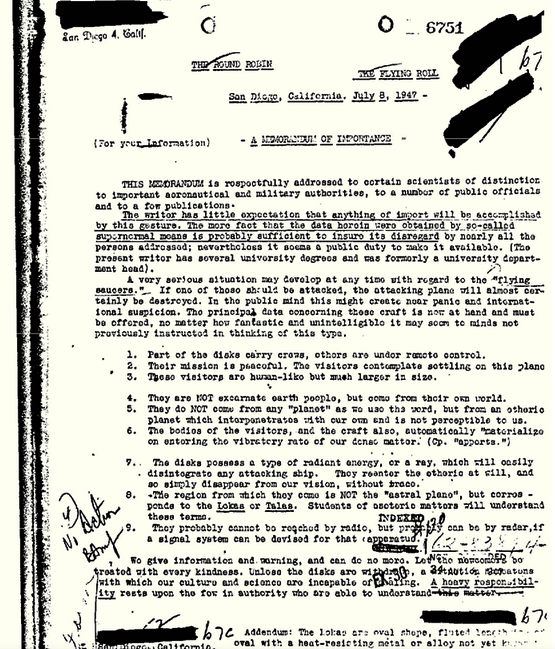 1. Part of the disk carry crews, others are under remote control.
2. Their mission is peaceful and they are considering to establish on our planet.
3. These visitors are human-like but much longer in size.
4. They have no planet such as we live on earth. They come from their own world, an ethereal world that is linked to our own, but we cannot perceive it.
5. The bodies of the visitors and the craft also, automatically materialize when they arrive to our vibration.
6. The discs posses a type of radiant energy, or a ray, which will easily disintegrate any attacking ship.
7. They can become ethereal and invisible without leaving a trail.
8. They probably cannot be reached by radio, but they can sometimes be caught on the radar.