1. Mysterious energy beam above the Bosnian pyramid of the Sun.

A team of physicists detected an energy beam coming through the top of the Bosnian Pyramid of the Sun. The radius of the beam is 4.5 meters with a frequency of 28 kHz. The beam is continuous and its strength grows as it moves up and away from the pyramid. This phenomenon contradicts the known laws of physic and technology. This is the first proof of non-herzian technology on the Planet. It seems that the pyramid-builders created a perpetual motion machine a long time ago and this “energy machine” is still working.

In the underground labyrinth, in 2010, we discovered three chambers and a small blue lake. Energy screening shows that the ionization level is 43 times higher than the average concentration outside which makes the underground chambers into “healing rooms”.

Further electromagnetic detection in 2011 confirmed that levels of negative radiation through the Hartman, Curry and Schneider grids are equal to zero in the tunnels. There was no technical radiation (from power lines and/or other technology) found in the tunnels and no cosmic radioactivity. Ceramic sculptures are positioned over the underground water flows and the negative energy is transformed into positive.

The list of the wonders in Bosnian archaeology does not end here.. read entire article 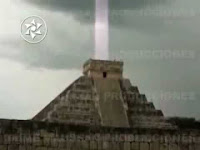 On June 24, 2009, a beam of light was captured on photo above the ChiChen Itza Pyramid (on the Yucatan peninsula in Mexico).

The witnesses that captured this photo, did not see anything there until seeing it in the photos.

And this photo was taken in 2000 and shows the Pyramid of the Moon in Teotihuacan in Mexico. 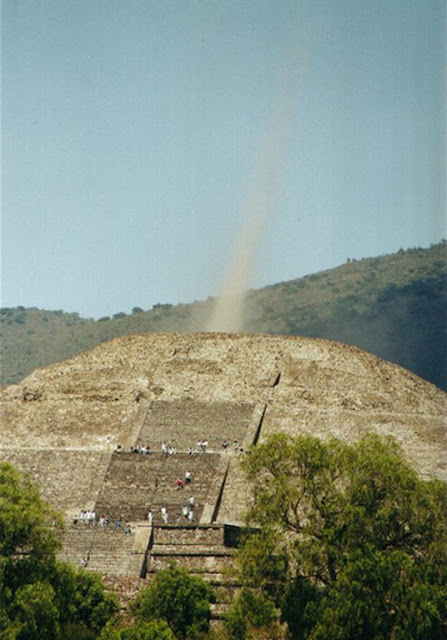 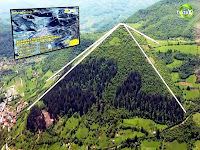 2. Unique discovery was made in Bosnia Pyramids!

Where exactly? It was near well known Sarajevo, beside the town of Visoko.

The main pyramid, Pyramid of the Sun is not a small or unimpressive structure. It is 220 meters high and the width of sides is more than 360 meters! Exterior of the revealed pyramid is covered, or better say tiled, by stone-hard blocks made of original mixture and by genuine technology. This fact, together with many others, indicates presence and activity of unknown ancient civilization.

Dr. Sam Semir Osmanagich who is the head and author of archeological research and all the project in Visoko went into Pyramid of the Sun. Were the pyramids used as a source of energy? And if so, which kind of it?

Electrical engineers measured energetic beam situated in the center of The Pyramid of the Sun. Its diameter is 4.5 meters, having frequency of 28 KHz, the origin is not natural -- it is artificial.

Dr. Sam Semir Osmanagich explains what has been found lately and so far in the Bosnian valley of the Pyramids:

A recent carbon dating performed on a pyramid in Bosnia, proves it to be at least 25 thousand years old.

Most scientists and historians however believe that human civilization started about 5,000 years ago with the Sumerians and Babylonians. That is, until artifacts were found, which predate them. These discoveries suggest, that there was a pre-historical civilization around the world- one that must have been highly advanced.

These pyramids are located in China, but up until a few decades ago, China has denied the existence of them.

Most of what you read about these pyramids is based on speculation and anecdotal evidence, they could be much older than China reports them to be.

Join David Hatcher Childress in Egypt where he meets up with British engineer Christopher Dunn.

Together they explore the Giza area, going to ancient pyramid sites, underground catacombs and megalithic quarries not usually visited by tourists. Here they examine saw marks, advanced lifting and moving techniques found at the Giza Plateau, Abu Rawash, Abu Garab, and the underground catacombs of the Serapeum and other areas.

Finally Dunn explains his theory of the Giza Power Plant and his view that the pyramids at Giza were originally part of a plan to "drive the earth into harmony." A mind-blowing look at solid evidence for extraordinary ancient technology.

In 2004, sailors aboard USS Ronald Reagan (CVN-76) say they encountered a mysterious, orb-shaped flying object off the eastern coast of the United States, that nearly two decades later, still defies explanation.  According to witnesses who were on the nuclear-powered Nimitz-class supercarrier that fateful night, a roughly 20 to 40-foot wide, luminous round object suddenly showed up and began to hover over the ship’s flight deck.  Karol Olesiak who was a 3rd class petty officer and Quartermaster on the Ronald Reagan at the time of the incident told The Debrief that when he arrived to relieve the previous watch that evening, the outgoing Quartermaster of the Watch indicated something was already going on at that time, though the individual offered no additional information. However, it soon became apparent to Olesiak that something was happening outside above the flight deck.  “I’m pretty sure ‘it’ was there,” Olesiak said. “And they were like, ‘I don’t know what that is. I don’t care.’
Read more

Looking at the famous Da Vinci, “The Last Supper” picture, mirroring and inverting the picture in the correct way, inverting it right down the middle you get a hidden image that is unbelievable. What is revealed is absolutely Jaw Dropping! The question is, what did Da Vinci Know that he is trying to reveal? Link: Photo's "The Last Supper Wikipedia http://upload.wikimedia.org/wikipedia/commons/3/34/DaVinciCodeSolution.jpg Original http://dl.dropboxusercontent.com/u/3687918/the_original.jpg Mirror http://dl.dropboxusercontent.com/u/3687918/Mirror_aligned.png
Read more

Concerns that UFOs have never-before-seen capabilities that can outmaneuver and outperform the US's most advanced military technology prompted Congress to call a historic UFO hearing, reports TheSun .  The House Intelligence Subcommittee will host the first congressional hearings on UFOs in more than 50 years Tuesday., May 17, 2022, Chaired by Rep. André Carson (D-Ind.), the hearing will include testimony from top U.S. intelligence and defense officials and follows last year's key government report on unidentified aerial phenomena.     Jeremy Corbell says Tuesday's congressional hearing on UFOs could confirm decades-old theories on mysterious sightings.     Ben Hansen, host of "UFO Witness" on Discovery + and UFO expert Nick Pope believe the US government knows more than it is letting on, and the truth could be revealed at Tuesday's congressional hearing.
Read more