By Juan von Trillion. The range of the implications of the earth being hollow are important. Hugely, massively (pun) important. They go as far as explaining dozens of anomalies that surround us. All freaking kinds of parallel, alternative, weird and conspiratorial ideas. Ideas which are becoming mainstream, and not that it matters what a majority of any kind thinks or what opinions it holds. The masses are dark (doesn't) matter in the larger scheme of things. 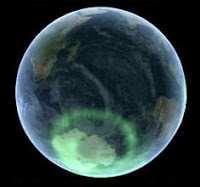 Part 3: Videos on the Web

This is how the Inner Earth could look like from a human perspective.