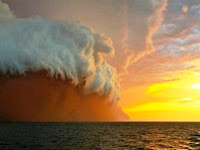 An enormous wall of dust has hit part of Australia as residents brace themselves for a tropical cyclone.

The stunning images of the wild dust storm were captured by tugboat works and aeroplane passengers near the town of Onslow in north-western Australia.

Local reports say the huge swathes of red sand and dust had been picked up by strong winds in the Indian Ocean before being dropped near the town.

The tsunami-like wave of sand could be seen travelling for miles and dwarfed ships out at sea.

Tugboat worker Brett Martin, who shot some of the pictures, said before the storm hit conditions were calm and glassy. But when the dust arrived visibility was reduced to just 100 metres and the swell rose to two metres.

Bureau of Meterology manager of climate services Glenn Cook told The Australian the dust storm was not directly related to the cyclone - the centre of which is still hundreds of kilometres away. Wind gusts in Onslow reached 63mph and the dust storm was made worse by the lack of rain in the region.