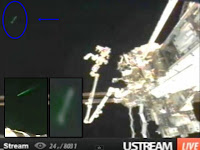 An unknown green flying object was visible during the ISS live stream on January 16, 2013.(first video).

To our surprise, the same green object appeared again on the live stream of last Friday, January 25, 2013. (second video).

Just coincidence and it's a natural phenomenon. Or.. maybe an unknown form of extraterrestrial life in space?