Aerospace engineer talks about Area 51 and the technology of UFOs 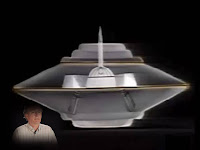 Since 1989, there are the stories about flying saucers at Nevada's mysterious Area 51 military base.

Two new books explore how the story has evolved over the past 24 years and whether there is any truth to the claims of former government scientist Bob Lazar, who says he worked near the secret base at Groom Lake.

One book by Canadian researcher Grant Cameron, the writer of  UFOs, Area 51 and Government Informants alleges the Area 51 tale was part of a planned, but gradual, release of information to the public about the UFO subject.

Cameron said that formal disclosure by the government is unlikely, but that a program of gradual disclosure is underway, using mass media gradually releasing the core story, using fictionalized versions to protect classified material regarding national security, such as how they fly, how they outrun our jets," said Cameron.
"They want to protect that, but not have the public stuck back in 1947."

Cameron is expected to speak at the Atomic Testing Museum later this year. Tonight, another author, aerospace engineer T.L. Keller, will speak at the area 51 museum about his new book, which examines the technology of UFOs.

Keller worked for the Jet Propulsion Laboratory of NASA on a team researching interplanetary exploration and where he developed a computer system for interplanetary missions.

During a speech in 2011, Keller discussed the possibilities of the “super-secret” black projects that are tested in the area, and other technology that might just be harnessing alien propulsion technology. Keller also refers to a speech that Ben Rich gave in 1993 at UCLA about his work at Lockheed Martin. The retiring CEO told the audience, “If you can imagine it, then Lockheed-Martin has done it.”

Keller said that signaled that a lot of the science fiction devices that are depicted in movies are already being created, or have already been created.