Debris from Comet ISON could dust the Earth with Meteoroids in early 2014! 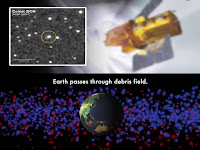 Anticipation is building as Comet ISON plunges into the inner solar system for a close encounter with the sun in November 2013 and expected to become a bright naked-eye object later this year, (arrives on Dec. 26, 2013.

Blasted at point-blank range by solar radiation, the sungrazer will likely become one of the finest comets in many years.

When NASA's Swift spacecraft observed the comet in January 2013, it was still near the orbit of Jupiter, but already very active. More than 112,000 pounds of dust were spewing from the comet's nucleus every minute.

ISON will not be a threat to Earth - getting no closer to Earth than about 40 million miles, but a new model of the debris flowing from Comet ISON suggests that the sungrazer could dust the Earth with meteoroids in early 2014.

It turns out, some of that dust might end up on Earth!

Experts discuss the possibilities in a video from ScienceNASA.