A group of researchers worked for 13 years at the Human Genome Project (Project completed in 2003) indicate that they made an astonishing scientific discovery: They believe so-called 97% non-coding sequences in human DNA is no less than genetic code of extraterrestrial life forms.

Non-coding sequences, originally known as "junk DNA", were discovered years ago, and their function remained a mystery. The overwhelming majority of Human DNA is "Off-world" in origin.

After comprehensive analysis with the assistance of other scientists, computer programmers, mathematicians, and other learned scholars, Professor Chang had wondered if the apparently "junk Human DNA" was created by some kind of "extraterrestrial programmer".

Professor Chang further stipulates that "Our hypothesis is that a higher extraterrestrial life form was engaged in creating new life and planting it on various planets. Earth is just one of them.

Professor Chang further indicates that "What we see in our DNA is a program consisting of two versions, a big code and basic code." Mr. Chang then affirms that the "First fact is, the complete 'program' was positively not written on Earth; that is now a verified fact. The second fact is, that genes by themselves are not enough to explain evolution; there must be something more in 'the game'."

"Soon or later", Professor Chang says "we have to come to grips with the unbelievable notion that every life on Earth carries genetic code for his extraterrestrial cousin and that evolution is not what we think it is."

The implications of these scientific finds would reinforce claims by other scientists and observers of having contact with 'off-world' human looking extraterrestrials.

The 'off-world' human looking extraterrestrial have been claimed to have provided some of the genetic material for human evolution, and that many of these extraterrestrials have allowed some of their personnel to incarnate as 'star seeds' on Earth in human families. These "star seeds", "star children" or "star people" 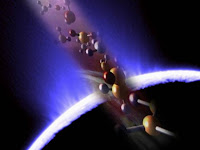 Now in 2013, scientists from Kazakhstan believe that human DNA was encoded with an extraterrestrial signal by an ancient alien civilisation.

They call it "biological SETI" and the researchers claim that the mathematical code in human DNA cannot be explained by evolution.

In a nutshell, we're living, breathing vessels for some kind of alien message which is more easily used to detect extra terrestrial life than via radio transmission.

"Once fixed, the code might stay unchanged over cosmological timescales; in fact, it is the most durable construct known," the researchers wrote in scientific journal Icarus. "Therefore it represents an exceptionally reliable storage for an intelligent signature.

"Once the genome is appropriately rewritten the new code with a signature will stay frozen in the cell and its progeny, which might then be delivered through space and time."

The scientists also claim that human DNA is ordered so precisely that it reveals an "ensemble of arithmetical and ideographical patterns of symbolic language".

Their research has led the scientists to conclude that we were invented "outside the solar system, already several billion years ago".

One mystery remains: If we were the creation of aliens, who created them?