US Navy is deploying the 'HAARP' platform SBX-1 to hit North Korea with earthquakes? 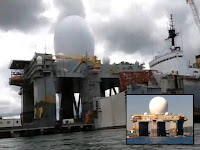 The US Navy is reportedly deploying the huge Sea-based X-band radar to the Korean Peninsula what suggests that North Korea could be hit by a massive HAARP-made earthquake anytime soon?

Coincidence? On April 6, 2013, a powerful 6.2-magnitude earthquake struck early in eastern Russia near the border with China and North Korea and a 6.1-magnitude quake struck Russia’s far east last month, and a 6.9 quake rocked in the same region in February.

They are gearing up for something big?

A disturbing message came from a construction worker at Barksdale AFB. He told that the security and activity at Barksdale has been stepped up by 300%.

His words "They are bringing in serious junk, moving in warheads...I was working in an area where cruise missiles are brought in, put together, armed, and shipped out--they are shipping some serious s*** over there." Read entire article