Massive and destructive Tornado rips across Texas - May 15, 2013 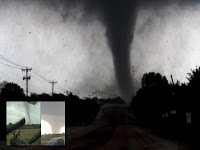 A tornado slammed into a North Texas lakefront town of Granbury, demolishing homes and injuring an undetermined number of people.

Lt. Kathy Jividen of the Hood County Sheriff's office told CBS News that there are "most likely fatalities," but no information on numbers yet. She also confirms numerous injures, "some critical", and "at least three tornadoes have touched down." The area of damage is "extensive."

She also said crews are currently going home to home in the Granbury area searching for trapped bodies.X

The tornado was part of a system of severe thunderstorms that spawned several tornadoes across North Texas, dropping large hail in some areas.

The extent of the damage and injuries was not immediately clear. However, police reported the hardest hit area was the Rancho Brazos subdivision and adjoining areas along Lake Granbury.

Another tornado hit the small town of Millsap, about 40 miles west of Fort Worth. Parker County Judge Mark Kelley said roof damage was reported to several houses and a barn was destroyed, but no injuries were reported.

Hail up to the size of grapefruit pelted the area around Mineral Wells on Wednesday evening. A police dispatcher reported only minor damage.

Kathy Jividen, a spokeswoman for the Hood County, Texas, sheriff's office said there were "multiple fatalities" in the wake of the storm.