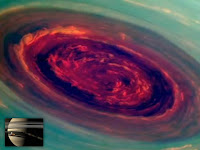 The hurricane's eye is about 1,250 miles (2,000 kilometers) wide, 20 times larger than the average hurricane eye on Earth. Thin, bright clouds at the outer edge of the hurricane are traveling 330 mph (150 meters per second). The hurricane swirls inside a large, mysterious, six-sided weather pattern known as the hexagon.

A terrestrial hurricane and Saturn's north polar vortex have a central eye with no clouds or very low clouds. Other similar features include high clouds forming an eye wall, other high clouds spiraling around the eye, and a counter-clockwise spin in the northern hemisphere.

A major difference between the hurricanes is that the one on Saturn is much bigger than its counterparts on Earth and spins surprisingly fast. At Saturn, the wind in the eye wall blows more than four times faster than hurricane-force winds on Earth. Unlike terrestrial hurricanes, which tend to move, the Saturnian hurricane is locked onto the planet's north pole. On Earth, hurricanes tend to drift northward because of the forces acting on the fast swirls of wind as the planet rotates.