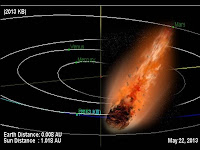 Nevertheless, .008 AU is still about three times the distance of the Moon - Earth, or about 744,000 miles, but it is remarkable that Asteroid 2013 KB sits around the same position for almost 1 day before moving on.

Listen to the information and explanation from OutrDemnDarkness in the video below:

Besides, there are two additional asteroids coming in along with 2013 KB:

With four fireballs spotted over U.S. the last days, a Mexico fireball on May 18, 2013, a meteorite near miss in New Zealand, another meteorite strikes Mahangu field in Namibia and the flyby of the 1.7 miles wide Asteroid 1998 QE2 on may 31, 2013 the number of meteors/meteorites that fall to earth continues to increase...