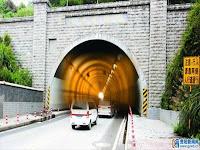 A time travel tunnel was discovered in China. The "time tunnel" as the locals call it, is said to be able to reverse time.

The tunnel is over 400 meters long and apparently when driving through the tunnel, the time on your cell phone jumps back one hour.

The reporter who wrote this article for China's Gui Yang Evening News personally tested this tunnel and reported the phenomenon happened eight out of ten times after driving through the tunnel on May 22.

So basically here's how it works, say you enter the tunnel at 9 am and exit at 9:05 am, the time on your cell phone will display 8:05 am. The time is corrected after traveling a kilometer from the tunnel, according to mobile phone users.

So far there has been no explanation about this phenomenon. globaltime.cn