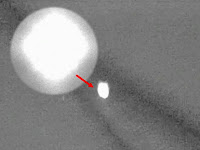 Witness: "I was filming another object when it suddenly came on a ball of fire orange red on the size of the full moon was not able to estimate the magnitude".

"It passed very close to my house without making a noise was moving from west to south, then disappeared behind my building". zetareticoli2010