The helical model - our Galaxy is a vortex 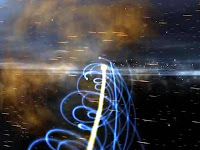 Our Galaxy is a Vortex.

Notes on the video below: