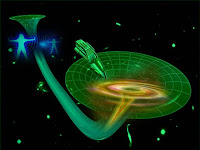 According to a UCLA engineering alumnus, in 1993 a fellow alumnus, who happened to run one of the most advanced and secretive aircraft development organizations in the world, says the key to the technology that will allow us to travel to the stars, without taking a lifetime to get there, lies in ESP.

In a recent interview with Open Minds, Jan Harzan, the new director of the Mutual UFO Network, told Open Minds about a presentation by Ben Rich (Ben Rich was the director of Lockheed’s Skunk Works from 1975 to 1991) he attended in which he feels Rich shared some amazing insight.

Rich ended his presentation with these words: ‘We now have the technology to take ET home. We found an error in the equations and we now know how to travel to the stars, and it won’t take us a lifetime to do it.”

Rich excused himself and began walking towards the door. Harzan called to Rich to ask him one last question. He told Rich, “I have a real interest in the propulsion you are talking about that gets us to the stars. Can you tell me how it works?” Rich stopped and then asked Harzan if he knew how ESP worked. Jan says “I don’t know, all points in space and time are connected?” Rich replied, “That’s how it works.”

The existence of ESP and other paranormal powers such as psychokinesis (PK), are disputed, though systematic experimental research on these subjects, known collectively as psi.

ESP is based upon apparently unusual events that seem inexplicable. However, we should not assume that every event in the universe can be explained. Nor should we assume that what is inexplicable requires a paranormal (or supernatural) explanation. ESP is the knowledge of external objects or events without the aid of the senses.

Defenders of ESP/ psi claim that the ganzfeld experiments, the CIA's remote viewing experiments, and attempts to influence randomizers at Princeton Engineering Anomalies Research have produced evidence of ESP.

Most common of ESP is "Telepathy" which is the apparent ability to send and receive "thoughts" and other mental data directly from one mind to another. Another ability is called "Precognition" which is the ability to be able to foretell future events. Telepathy depends upon a system similar to "radio", in that some sort of "wave carrier" emanates from the brain of the "transmitter" person and is thus "received" by virtue of some sort of "organ" in the brain of another person.

Other abilities useful in teleportation are Tele-Visualization and ESP (Extrasensory Perception). The ability of teleportation is used in Time travel, Interstellar travel, and Dimensional travel.

Teleportation is the near instantaneous transport of the Psychic from one location to another and there is no other form of travel faster than teleportation. Additional information about ESP at Wingmakers.co.nz

Rich was simply referring to ESP as being the key to how the technology works to travel to the stars and the way how you can come into contact with ET.

Just as we transmit, or send out these thought waves, so we receive thought transmissions of other souls. We receive them like a radio and respond to them unconsciously as though they were our own thoughts.