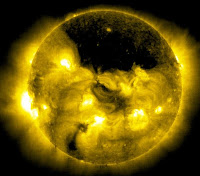 Something is up with the sun.In case you haven’t heard about it, a huge portion of the sun’s corona has gone missing.

It has begun to behave very erratically, and scientists don't know quite what to make of it. Sunspot activity appears to be slowing down with each new cycle and absolutely gigantic holes have started to appear in the sun.

At the moment, the sun is approaching the peak of its 11 year cycle, and an increasing number of scientists are becoming concerned about what the next cycle will bring.

It is a fact that the current solar cycle 24 has been the weakest in 100 years. In 2009, a panel of forecasters led by NOAA predicted a below-average peak. Now that Solar Max has arrived, however, it is even weaker than they expected. 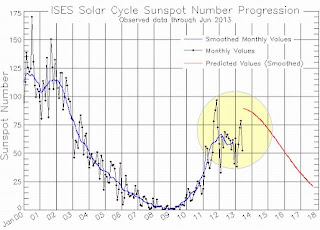 It may be premature to declare Solar Cycle 24 underwhelming.

Solar physicist Dean Pesnell of the Goddard Space Flight Center thinks Solar Cycle 24 is double peaked -- and the second peak is yet to come.

The strongest solar storm in recorded history, the Carrington Event of 1859, occurred during a relatively weak solar cycle like this one.

But, if sunspot activity continues to diminish, could the sunspot cycle eventually die altogether?

Is it possible that we could be approaching another ice age? Even worse, could the increasingly erratic behavior of the sun be an indication that the sun is dying? Traditionally, scientists have taught that the sun won't die until billions of years from now, but in recent years astronomers have observed stars similar to our own sun suddenly begin to behave very erratically and then rapidly die. Is it possible that the same thing could happen to our sun?

Video below: Recorded on July 16, 2013 ,00h30-23h30 UTC
Second rotation for this massive coronal hole CH577 (ancient CH574).
CH577 is fixed on the northern hemisphere with a partial geoeffective position.

A coronal hole is an unipolar magnetic field opens towards the interplanetary space. On composite wavelengths of UV light, a coronal hole appear dark because there is less matter at the T° we are observing in. Here, the transition between wavelengths works well.