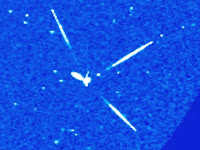 In recent months, there are many UFOs observed near the sun. Their presence has something to do with the increased solar activity and the approaching comet Ison?