Strange Sounds in the sky over Blackburn, England caused by UFO? - Nov 5, 2013 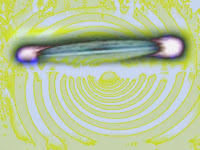 Last month on October 25, strange sounds were recorded over Blackburn, UK. Given it is not a new phenomenon and has been observed in previous years.

In 2009, Niburu.nl did a research on this phenomenon and concluded that it may be an object of enormous proportions.

Niburu: “Given the outline that covers the sound and the time / distance the object travels, we come to a minimum size of several kilometers. The sound is not produced by a form of propulsion, but its more displacement of a kind of air flow when an object moves at high altitude at a speed of around 150 km/h.”

In GeoChange Journal, Geophysicist Elchin Khalilov and his team analyzed records of sounds and found that most of their spectrum is not audible to humans.

“What people hear is only a small fraction of the actual power of these sounds. They are low-frequency acoustic emissions called acoustic-gravity waves; they are formed in the upper atmosphere,” he said.

It is possible that giant cloaked UFOs are responsible for these strange sounds and they utilize earth’s energy lines?

Is gravity a manifestation of energy from the Earth, connected with the Grid? If so, can they use certain points on the Grid to master gravity? Are UFOs defying the Earth’s gravity field, using some sort of anti-gravity?

Bruce Cathie a former pilot has observed the UFO phenomena for many years. Bruce Cathie “Verified sighting reports came to hand and I plotted on a map the precise positions of the sightings, and not to my surprise found that invariably the UFO positions fell with uncanny precision on the grid’s lines of longitude or latitude – never in the intervening spaces”. Read entire article