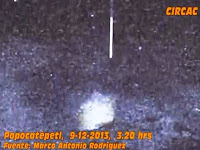 On December 5, 2013 a UFO seems to approach Mexico's Popocatepetl volcano.

Now, just a few days days later on December 9, 2013, a second object is recorded and enters the volcano at high speed. This time it’s an elongated object.

In October 2012 when a similar cylindrical object entered the volcano at high speed, emerging a few days later before a powerful earthquake took place.