September 25, 2014
The mysterious Georgia Guidestones, which some see as an elite manifesto for neo-eugenics and population reduction have received a strange 2014 update. 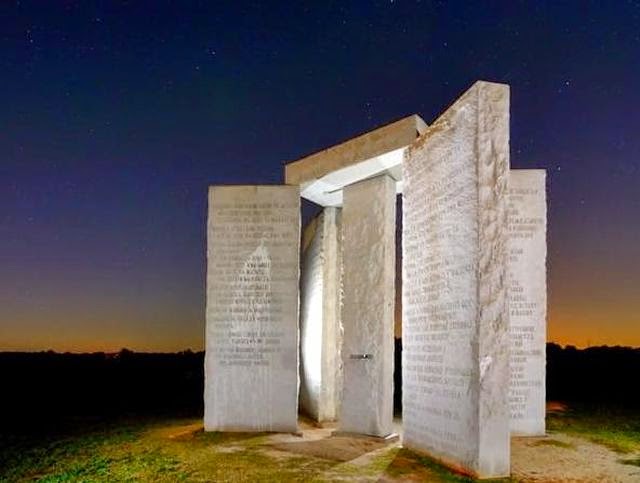 The mysterious Georgia Guidestones is a granite monument in Elbert County, Georgia, in the United States. A message clearly conveying a set of ten guidelines is inscribed on the structure in eight modern languages, and a shorter message is inscribed at the top of the structure in four ancient language scripts: Babylonian, Classical Greek, Sanskrit, and Egyptian hieroglyphs.

The stated purpose of the stones is to be “Guidestones to an Age of Reason,” but many believe they are actually a guide to Illuminati genocide.

The ten “commandments” on the stone appear to sketch out a framework for reconstructing society after a nuclear holocaust or similar apocalypse.

Now, this illuminati monument got a new stone added. Somebody has officially updated it with an engraved cube marking the year 2014 inserted into the English/Spanish slab of the 'new 10 commandments' just above the population reduction prophecy.

According to Dahboo777, the mysterious stones refer to some details written in the Book, 'The Age of Reason' and it underscored the importance of Thomas Paine, one of the founders of America, being repeatedly mentioned in R. C. Christian's book.

Note 1. The Age of Reason; Being an Investigation of True and Fabulous Theology is written by Thomas Paine. The age of reason challenges institutionalized religion and the legitimacy of the Bible, the central text of Christianity. Published in three parts in 1794, 1795, and 1807.

Note 2. R.C. Christian is the person who built the Georgia Guidestones. Many believe that R.C. Christian was merely spinning a cover story, and that his name links the small “group of loyal Americans” to a secret society known as the Order of the Rosy Cross, but the true identity of Mr. Christian and his anonymous group is still shrouded in mystery.

Dahboo777: “R. C. Christian didn't just mention Thomas Paine's books for nothing. I believe it is a very important clue.

“Every single copy of "The Age of Reason" in book stores today only have the first two parts in them but most people don't know that there is a 3rd part of the book that is always left out. I managed to get a hold of the 3rd part.”

“There is a section in the third part of "The Age of Reason" called "Origin of Freemasonry" that I think shows the link between the Georgia Guidestones and Thomas Paine were not just a coincidence and it actually confirms that Thomas Paine and the other founders of this country were actually Deists instead of Christians.”

Note 3. A deist believes that God exists and created the world, but does not interfere with His creation. Deists deny the Trinity, the inspiration of the Bible, the deity of Christ, miracles, and any supernatural act of redemption or salvation.

The answer to the prophecy inscribed in the stones including the new added 2014 cube is to be found in the third part of "The Age of Reason”?

You can find it on page 250. Download link: https://mega.co.nz/#!CQg0CQ7a!UrAopa1nb3uFDsTfYApiDR5-crhRI_MNAnpQVIEL8jU