January 28, 2015
Witness report: I was on a boat near the Petrohué Falls in Chile and took some pictures of the Osorno Volcano.

One picture shows a burning cigar-shaped UFO and it appears to take a nose dive directly into the volcano. 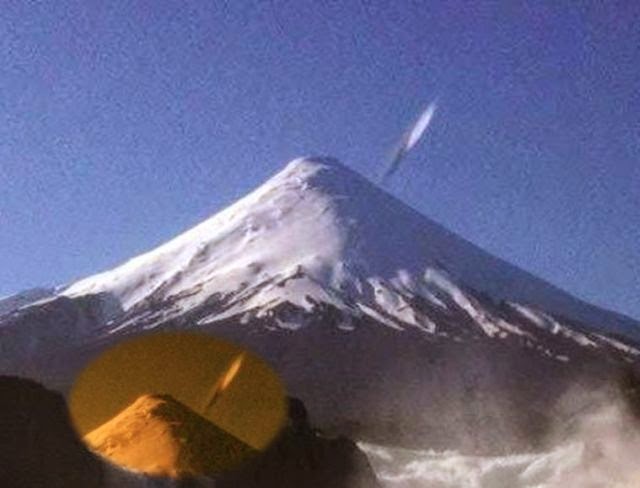 Osorno Volcano is a 2,652-metre (8,701 ft) tall conical stratovolcano lying between Osorno Province and Llanquihue Province, in Los Lagos Region of Chile. It stands on the southeastern shore of Llanquihue Lake, and also towers over Todos los Santos Lake. 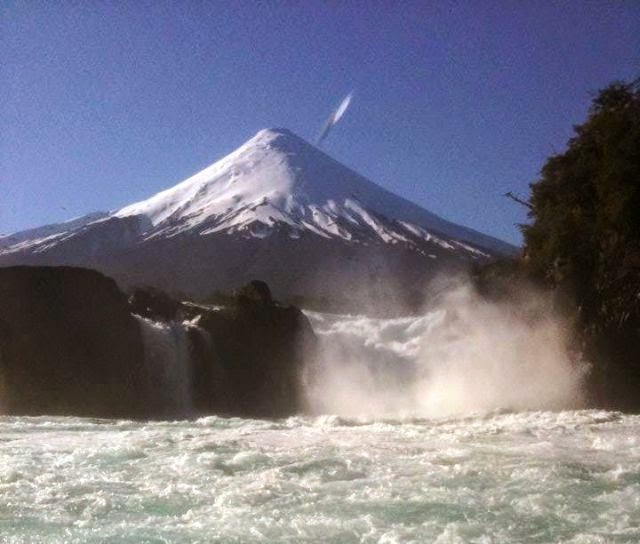 Osorno is one of the most active volcanoes of the southern Chilean Andes and sits on top of a 250,000-year-old eroded stratovolcano, La Picada, with a 6-km-wide caldera.

In 2005 a mysterious cigar-shaped object was photographed in the vicinity of the Osorno volcano.

Local residents claim such phenomena are common in the region.

January 20, 2021
Passenger captured a UFO on video while on board the Singapore Airlines plane heading to Zurich Airport. The passenger was about to record the landing but after minutes he witnessed a near collision with a UFO.  This video proves that the pilot is aware and prepared to dodge the UFO. The pilot followed safety protocol, the engines roared, and passengers panicked.  The pilot managed to avoid the unidentified flying object and made a safe landing at Zurich Airport later on. Date and time of the event: January 17th, 2021 between 7:30 and 7:50 am.
Read more

January 21, 2021
On January 21, 2021 the ISS live feed captured a fleet of UFOs flying through and under clouds.  While watching the ISS live feed on TV, the witness noticed several UFOs flying through and under the clouds below the ISS on which he grabbed his phone to record the remarkable event.  Then all of a sudden the live feed switched over to another camera and remained off for awhile afterwards, something which often happens when UFOs come into view. Mufon .
Read more

January 23, 2021
This is the story of James Arthur, Theresa Bier, and Doug Pearce all missing under unusual circumstances in the region south of Yosemite National Park.  David Paulides is a former police officer who is now an investigator and writer known primarily for his self-published books, one dedicated to proving the reality of Bigfoot, and his Missing 411 series of books, in which he documents the disappearance of people in national parks and elsewhere.  Paulides attributes mysterious, unspecified causes to these disappearances, while data analysis suggests that these disappearances are not statistically mysterious or unexpected.
Read more