March 01, 2015
An unusually gigantic UFO-like object was spotted near the sun on NASA’s Solar and Heliospheric Observatory (SOHO) This isn't the first UFO seen orbiting the Sun but it's certainly one of the most remarkable Unidentified Flying Objects. 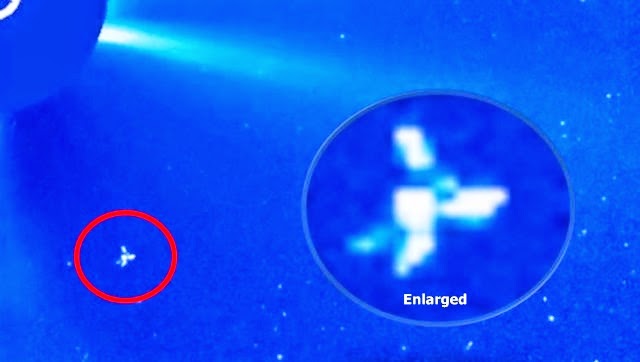 As always, there is much debate whether it is a UFO or not. I came across an article published by NASA in 2003/1/17.

According to NASA “Most commonly, UFO claims are due to perfectly natural flaws or artifacts in our publicly available data and images, having gone through a strikingly similar "enhancement" used to "prove" the existence of UFOs.”

NASA: “Ever since launch, there's been a number of people who've claimed to have seen flying saucers and other esoteric objects in SOHO images. Although some of these supposed pictures of UFOs can seem quite intriguing, they have always turned out to have a quite ordinary cause when examined by experienced SOHO scientists.”

“In recent days, we've been receiving so many questions and claims that we'd like to set the record straight: We've never seen anything that even suggests that there are UFOs "out there".

“In the past we've been accused of "covering up" UFO evidence when we present our explanations, and of "refusing to comment" (or "clamming up") when we give up on somebody who won't accept our explanations.”

NASA continues: “Yes, this was a picture from SOHO, but didn't show any UFO! We believe similar "enhancements", possibly starting with other types of image artifacts (see below for details), are behind all of the recently published "UFO proof" claims. Claims without the time and date of the picture(s) are close to worthless, because the data processing cannot be verified by others."

Despite NASA’s explanation and their attempt to damage the credibility of the UFO community the object, as shown on the SOHO LASCO C3 image of 2015/03/01 see first image and video below, is not enhanced or manipulated, it is not related or connected to a solar event or CME, it is a stand-alone object, even, it has a solid structure which makes me believe that this object is more than just a natural flaw or artifact.