NASA’s Mars Reconnaissance Orbiter has detected the presence of impact glass in some of the planet’s most ancient craters.

The search for life on Mars hasn’t yet turned up evidence, but recently a new potential means of finding some did emerge.

NASA’s Mars Reconnaissance Orbiter has detected the presence of impact glass in some of the planet’s most ancient craters.

Similar material found here on Earth has produced a wealth of information about early life forms, and researchers are hopeful that the deposits on Mars will do the same.

The search for the glass began in 2006, and locating it has proven particularly difficult as it doesn’t have a very strong spectral signal and thus typically evades remote discovery.

Overcoming that obstacle required numerous calculations and the creation of an algorithm.

Retrieving a sample, however, may prove to be less complicated.

An area near one of the deposits is already a potential landing site for the Red Planet rover scheduled to launch in 2020.

Other interesting objects found in the image: 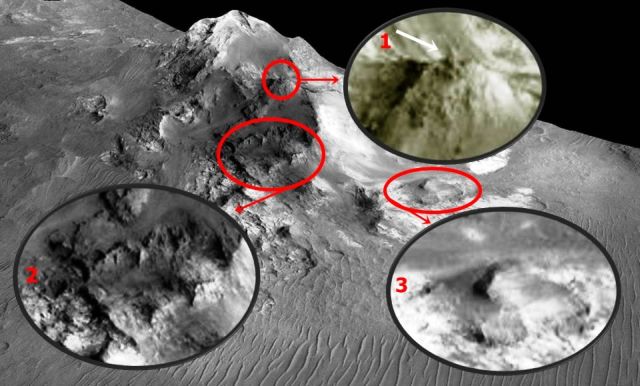 1. A kind of tower or statue on top of a mountain
2. An ancient ruin/building structures
3. A pyramid-like structure

You can download the original image here – change the color to black and white and zoom in to see the objects clearly.