Ceres Gets Weirder – Take a look at the new Ceres close-up photos released by NASA!

August 06, 2015
Get up close with Ceres' weird 'Pyramid' and bright spots in new NASA photos. The closer we get to Ceres, the more perplexing the dwarf planet grows.

The intriguing brightest spots on Ceres lie in a crater named Occator, which is about 60 miles (90 kilometers) across and 2 miles (4 kilometers) deep. Among the highest features seen on Ceres so far is a mountain about 4 miles (6 kilometers) high, which is roughly the elevation of Mount McKinley in Alaska's Denali National Park. It's unusual that it's not associated with a crater. Why is it sitting in the middle of nowhere?

Ceres is the largest object in the main asteroid belt between Mars and Jupiter. Dawn will resume its observations of Ceres in mid-August from an altitude of 900 miles (less than 1,500 kilometers), or three times closer to Ceres than its previous orbit.

If you take a closer look at the crater Occator, it looks like the crater is closed with an artificial made natural looking roof structure. 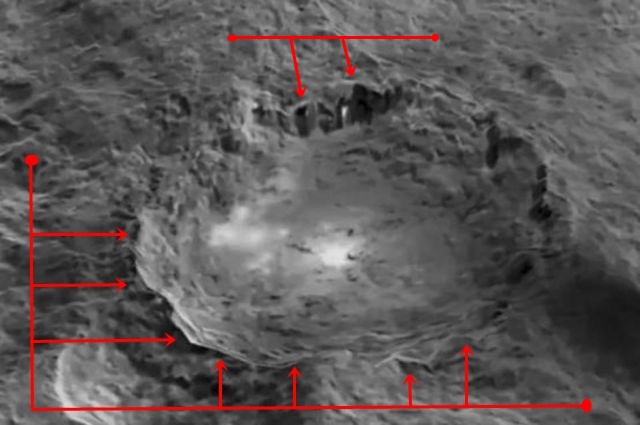 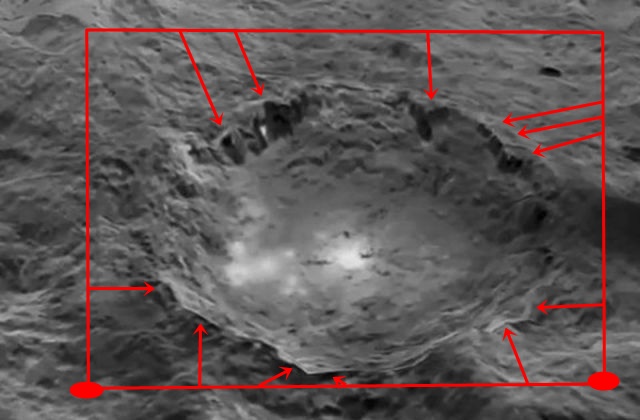 It is possible that the bright spots from the crater coming through the roof?

Are these lights major city lights?

And if so, who is living inside the crater?


These markings are clearly features of some sort of an ancient hexagon structure, which probably is the dome of a larger structure of building buried beneath the ice sheet and probably part of an underground ancient city. The dome is about 45 meters in diameter with visible walls of 8 meters high.


There are many artificial objects, structures and figures around the dome, a possible man-made entrance to the underground city and what looks like a military base or port in front of the dome, suggesting that the military and scientists already know this location which could mean that they are secretly exploring the underground city.

Click image to see the structure/dome in 1280x720 HD.
A quote taken from the book 'The Lost City of Antarctica, Civilizations of the Ancient World' reads as follows: