Massive Object and Tail Caught On SOHO Going Around The Sun

September 19, 2015
On Sept. 13, 2015, the Solar and Heliospheric Observatory -- a joint project of the European Space Agency and NASA -- discovered its 3,000th "sun-grazing comet”, cementing its standing as the greatest comet finder of all time.

But SOHO is not only a comet finder it also photographs unknown objects near the Sun or flying through our solar system. 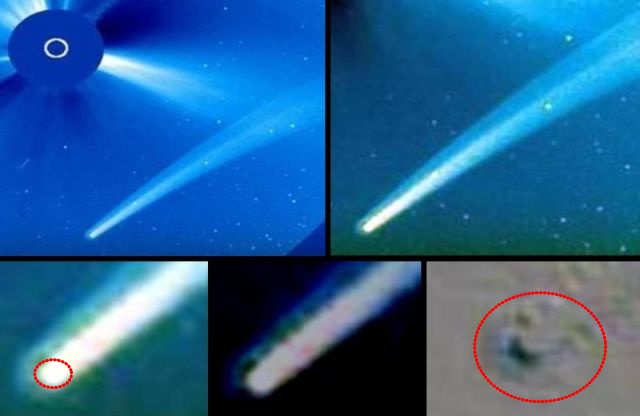 The latest SOHO images captured on September 18, 2015 show a massive unknown object with tail that goes around the Sun.

The force of this object must be enormous. Instead it plunges into the Sun like a comet the object can withstand the gravitational pull of the sun.

Of course it is possible that the phenomenon is caused by charged particles, from the Sun, brought by the solar wind, which hit the filters on the lens causing an artifact but a closer look at the object shows that it is solid and spherical, something that cannot be explained as just an artifact.

What kind of object can survive a close encounter with the Sun, a UFO, a huge space rock or something else?