November 19, 2015
Have UFOs suddenly taken an interest in golf? On June 7, 2015 a triangular UFO has been photographed above the Golf Club at Dove Mountain in Marana, Ariz. 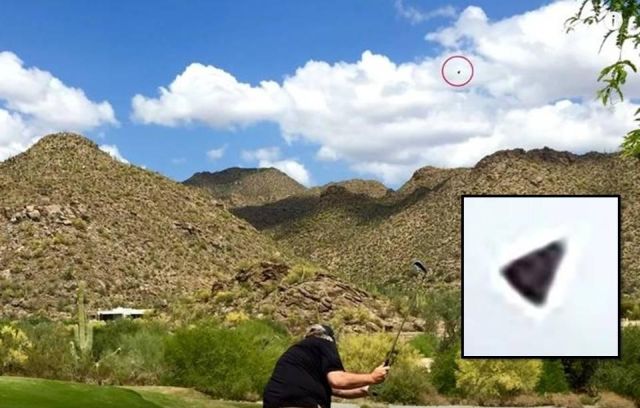 Witness report: On vacation (Tucson AZ) playing golf, watched and heard F18's flying around courses a lot that day, took picture of friend and saw craft in photo it made no sound unlike F18's, it was so far off I didn't think it was a craft, (maybe a bird) plus made no sound so I went back to playing golf.

Later that evening was looking at image with friend and we decided it had to be a craft of some kind. I worked for General Dynamics for few years and watched a lot of military aircraft flying and this looked nothing like any I have observed. It appeared to be ascending in a straight line at about a 20 degree angle. The sighting is reported to Mufon.