Empire Beneath The Ice: The truth about history has been hidden in the Antarctic

on December 22, 2015
On the Friday edition of TRUNEWS, December 18, 2015, host Rick Wiles greets Internationally acclaimed Author, Historian and Radio Host, Stephen Quayle, to discuss the shocking revelations exposed in his new book ‘Empire Beneath The Ice’: How The Nazis Won World War II". Between secret bases in the Antarctic, advanced UFO technology, and the establishment of an underground cabal, ruling the world from the shadows, everything the World thought we knew about the demise of Adolf Hitler and The Third Reich could be shaken to its core.

For the past seven years, Quayle has articulated the need for Americans to be aware of bioterrorism and weapons of mass destruction. Upon publication of Breathe No Evil, Quayle upstaged mainstream media by years spelling out detailed effects of bioterrorism.

Steve continues to shout from the rooftops, his concern for the massive loss of life due to lack of civil defense and preparation in the public and private sectors. 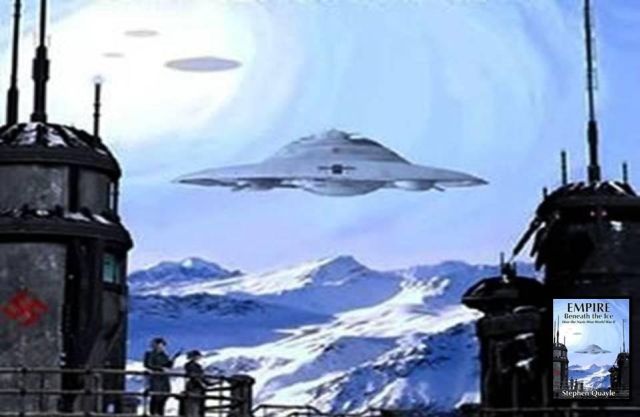 The truth about history has been hidden…

In ‘Empire Beneath The Ice’, author Stephen Quayle reveals why most of what you learned about World War II and the defeat of Nazi Germany is wrong. You’ll discover:

1. Why the suppressed evidence proves Adolf Hitler didn’t die before Germany surrendered during WWII, and how he eluded capture.

2. How Nazi SS members, scientists, and soldiers escaped with Hitler to create colonies in other parts of the world to continue their monstrous research.

3. Why in 1947 Admiral Richard E. Byrd warned that the US should adopt measures to protect against an invasion by hi-tech aircraft coming from the polar regions, adding, “The time has ended when we were able to take refuge in our isolation and rely on the certainty that the distances, the oceans, and the poles were a guarantee of safety.”

4. How, using advanced technology, Nazi saucers defeated the US military — long after WWII was supposedly over.

5. Why the US space program was mostly a sham, and why the “UFOs” that started appearing around the world in the late 1940s were (and still are) most likely flown by Nazi pilots. How key government, manufacturing, pharmaceutical, financial leaders, and institutions helped Hitler come into power, and facilitated the preservation of Nazi wealth and power after WWII.

6. Why today’s world is secretly controlled by a malevolent shadow government and entire populations are being surreptitiously brainwashed.

7. How ancient stargates have been duplicated to open portals into spiritual and demonic universes.

8. Why those controlling our planet have laid the groundwork for a takeover by a dictator who could best be described as the Antichrist of the Bible.

‘Empire Beneath The Ice’ carefully documents these and many more astounding facts, divulging the truth about what is happening today and it exposes the dangers our world faces, and will arm you with the tools you need to counter these unspeakable, secret evils.