March 03, 2016
A new large lava flow has erupted atop Pu'u O'o caldera (crater) on the Big Island of Hawaii.

It is now March 3, 2016... Remember back to March 05-06 2011, just a few days before the Japan Mega-quake ... this very same volcano showed increased activity, and sent off a very impressive flow of lava as Kilauea volcano experienced a full draining of the lava lake, said Dutchsinse. 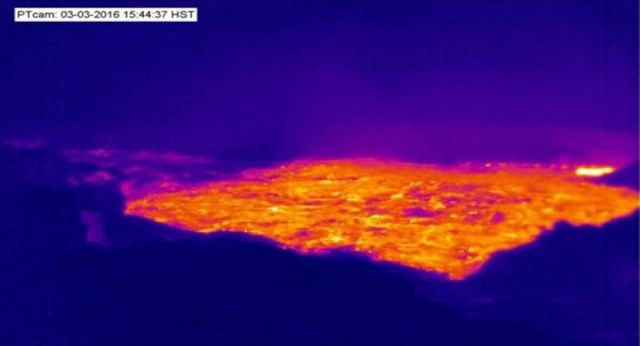 The above image is from a temporary thermal camera positioned on the northwest flank of Pu'u O'o looking southeast at Pu'u O'o's summit crater.

This newest flow of lava is currently at the crater of Pu'u O'o' and is part of a series of new rather impressive flows beginning to occur (again) at this particular volcano - which is part of the greater Hawaiian Kilauea volcanic complex.

This means that the lava tube system downstream of Pu'u O'o is plugged again, and once the magma gets to a certain point, it finds the weak area and erupts as a fissure eruption.