on April 26, 2016
Images from the Curiosity, Opportunity and Spirit Rovers, appear to add weight to a possible military presence on mars.

Judging by these official NASA images mars is indeed occupied by a secret deployment of military personnel possibly working in conjunction with the secret space program. 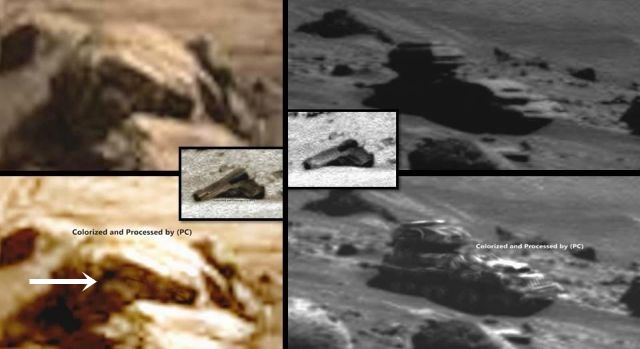 But not only images provide evidence that Mars is occupied by personnel of a secret military force.

In March 2014 “Captain Kaye,” whose real name is Randy Cramer, came forward to reveal that he had spent 17 years on Mars as US Marine Special Section (ss) as part of a highly classified program called the Mars Defense Force.

Randy Cramer joined the Mars Defense Force in combat and peacekeeping operations with indigenous Mars intelligent reptilian and insectoid (Mantid) civilizations. During this time, the U.S. Mars Defense Force, in alliance with Mars reptilians and Mantids, successfully fought off an attempted incursion of the Mars polar region by Draco reptilians.

The reason behind the possible military presence on Mars is to protect a secret gene-pool colony on Mars, of what Randy calls the Breakaway civilization of the military industrial complex.

The Breakaway civilization’s plan, called Alternative 3, intends to eliminate Earth’s current surface-dwelling humans and replace them with humans that are now part of a secret Mars colony selected for its preferred gene pool and elite status.

The means of elimination include intentional biowarfare, wars, tectonic and environmental wars (HAARP and chemtrails), GMOs and other toxic means.

Capt. Randy Cramer states he is speaking out in a NewsInsideOut interview under authorization of a secret mechanism established in 1953 by U.S. President Dwight Eisenhower to warn American citizens in the event their government was compromised and in danger of failing them or being overtaken.

Maybe Randy’s statements would have been nonsense, but a public statement of Laura Magdalene Eisenhower, great-granddaughter of former President Dwight David Eisenhower in where she has exposed her attempted recruitment from April 2006 through January 2007 by a secret Mars colony project actually confirms his statements.

Ms. Eisenhower said that the purpose of the secret Mars colony was to provide a survival civilization for the Earthling human race in the event of planned (such as HAARP or bio-weapon induced) or natural cataclysm (such as by solar flares) which would depopulate the Earth.

If we talking about planned depopulation of the human race by using biological and chemical agents, spraying it over our heads (chemtrails), yet the uptick in man-made strong earthquakes and volcanic eruptions by using weather warfare weapons, the statements of Randy Cramer and Laura Eisenhouwer become very plausible.