The Yellowstone live cam footage captured by KatMartin2016 on April 16, 2016 shows a new area that has started steaming off and on and places steaming which have never steaming before.

Something weird is really going on there as a big flash (at 4.05 mark first video – left of the screen) comes out of one of the geysers. 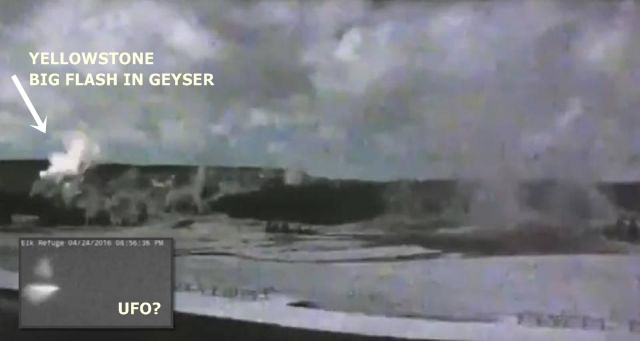 UFO captured hovering above the Elk Refuge near Yellowstone?

The cam ( See second video) recorded the object for almost 2 minutes (from 8.55.43 pm to 8.56.39 pm) therefore I think it is unlikely that the object would have been a bird in flight, but I could be wrong.

So is it possible that the live cam has recorded another unidentified flying object near Yellowstone or the object indeed is a bird? It still does not explain the bright flashes and the reflection that comes from the object.

Note: There's an uptick of UFO sightings in Yellowstone lately, maybe they feed off the energy from the magma moving up underneath the ground somehow they're apparently they're able to store it?

It's the same concept as what we see as lightning at the top of a volcano that's erupting, UFOs are quite often spotted around active volcanoes for that reason.