Giant UFOs The Ringmakers of Saturn

on August 22, 2016
Saturn the sixth planet from the sun and the second largest planet in the solar system is in the news again. Last month NASA has released new images of Saturn's rings but these rings looking a little strange and bent, like the rings are warped when they intersect the planet’s limb.

There is a lot of mystery surrounding these rings but Dr. Noran Bergun who has worked for the US Government has seen many NASA photographs of Saturn and its rings. 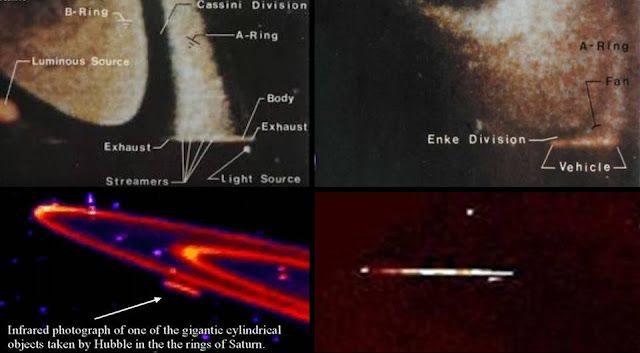 Then, Dr. Bergrun privately undertook a detailed study of NASA Voyager 1 and Voyager 2 photographs of the rings of Saturn and discovered how the rings are being formed by emissions emerging from gigantic (EMV’s) electromagnetic vehicles possibly being controlled by a form of intelligence.

Besides these giant UFOs around Saturn, they are also seen near the Sun and other places in space. Below some of these huge motherships captured near the Sun and in Space which are comparable in size to the UFOs of Saturn.

Imagine a ship so massive that it could affect a planets gravitation fields to extreme degress just by coming close to us.

Imagine just for a moment a ship so huge that if it came down into our atmosphere it would block the sun from one side of the earth to the other, effectively darkening the planet merely by it’s size.

In the next video Kerry from project Camelot interviews Dr. Bergrun about Saturn's mysterious rings and UFOs.