Strange island that rotates on its own axis caused by supernatural event from the past?

on August 27, 2016
A helicopter pilot accidentally flying over a remote area in Southern Argentina discovered a perfect circular island surrounded by a thin channel of water with an outside diameter of 130 yards.

Both, the inner and outer circles, are perfect. The center circle moves and rotates on its own axis. 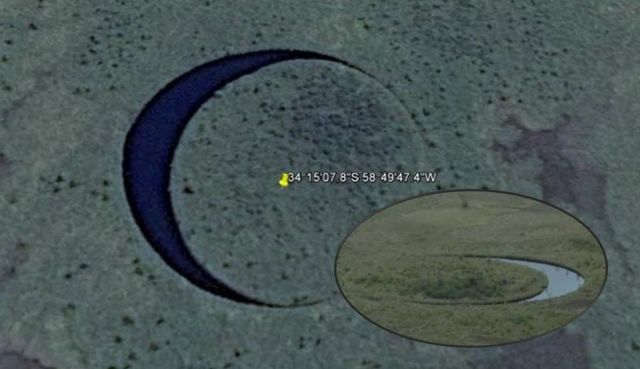 How long had the island been there? What caused this weird formation? Why does it move? How can it last for so long intact without deforming? How is it possible that having no water currents, aquatic plants don’t grow and cover it entirely?

A team of researchers decided to investigate further.

They made their first overland expedition with some equipment, in which the impenetrable vegetation and swamps left them at only 900 yards from the circle completely exhausted. They organized a second expedition. After 8 hours of walking through different paths, they arrived.

They discovered that water is incredibly clear and cold, something totally unusual in the area. The bottom is hard in contrast to the swampy marshes surrounding it.

The central part floats and they do not know over what… but it floats.

Listening to stories told by locals it appears that the strange phenomenon has something to do with supernatural events that have occurred in the past.

As they want to unfold the mystery surrounding this place they want to return with a complete scientific expedition having: Scuba gear, geologists, biologists, ufologists, specialized drones and more, and take samples of the water, soil, plants and all other objects they may find. More information at: Elojoproject.

Video below shows the expedition to the mysterious island.