December 14, 2016
December 13, 2016: Multiple GLE's (Ground Level Events) have in the last 36 hours been detected by a South Pole Neutron Monitor. The Sun is quiet...where did the cosmic rays that caused this come from? 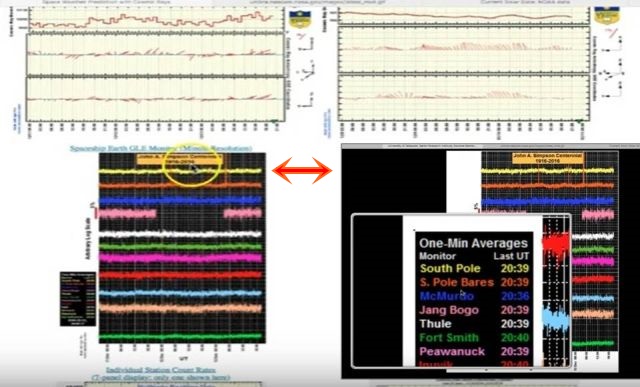 A superwave cosmic ray burst that is not detectable above cosmic background levels but which carries a gamma ray burst and gravity wave pulse at its forefront, would likely produce seismic and EMP effects much stronger than the December 2004 earthquake and gamma ray burst.

This 2004 gamma ray burst was so powerful that it bounced off the Moon and lit up the Earth's upper atmosphere. The flash was brighter than anything ever detected from beyond our Solar System and lasted over a tenth of a second. NASA and European satellites and many radio telescopes detected the flash and its aftermath on December 27, 2004, one day after the earthquake and tsunami which happened on December 26, 2004.

Such a close and powerful eruption raises the question of whether the gamma ray burst was the cause of the 2004 earthquake and tsunami or an even larger influx of gamma rays, disturbing the atmosphere, was responsible for one of the mass extinctions known to have occurred on earth hundreds of millions of years ago. ( See also video: Galactic Superwave Outburst Alert).

It seems that another massive cosmic ray burst is on its way to hit Earth. The first powerless cosmic ray arrived on October 15, 2016 but a second powerful cosmic ray seems to arrive around December 26, 2016 according to several reports and although MSM (Main Stream Media) cover-up this issue there has been a lot of signaling.

On October 13, 2016 President Obama has signed the executive order: Coordinating efforts to prepare the Nation for extreme Space Weather Events and then Kiril, Kerry and Aldrin traveled to the South Pole.

Last week on December 8, 2016 there was the mysterious vibration which was detected around the world and although the vibration looked like a classic earthquake, there was NO earthquake at the time of the event and No source.

Besides the enormous crack spreading across Antarctica, now a South Pole Neutron Monitor detected multiple ground level events but it is the same as with the strange vibrations, there is no source!

We might wonder whether the on-going strange events around the world and, in particular, in Antarctica have something to do with a powerful wave that has the potential to cause large devastation to the earth?