December 23, 2016
On December 16, 2016 NASA’s Solar Dynamics Observatory spotted a hug coronal hole in the sun’s atmosphere which is the third one within one month. This coronal hole, the same one as the holes on October 25-28, 2016 and November 23-26, 2016 has turned towards earth whereby a massive stream of incoming energy is hitting the earth. 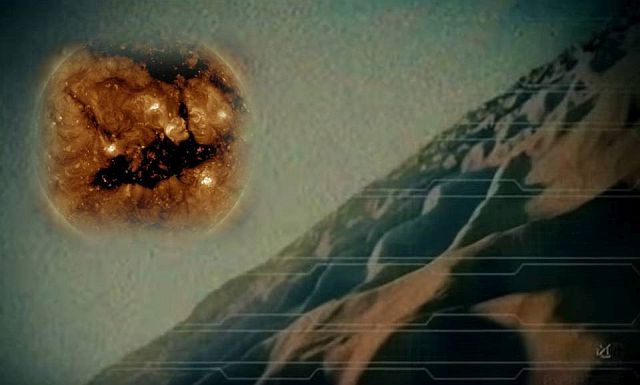 This large wave of energy impacting the entire planet has unintentional been detected by the MIMIC TPW microwave background imagery started to form on 12/18 at about 15:00UTC and ongoing as of 12/19/2016 at 1:20am US central time).

The MIMIC TPW microwave background imagery is not a glitch, computer error, or fake, however, surprisingly on December 19, 2016 at 4.57 pm MIMIC suddenly issued a statement via twitter saying this is a mistake, an error in their system!

I don't know what to make of this but this current coronal hole is enormous and it is the first time I've ever seen something this large over such a vast area show up on MIMIC like this according to Dutchsince.

The potential amount of incoming energy going to the core of the planet would be tremendous and this of course could increase volcanic activity, and cause major earthquakes and if the event is really occurring then the area which may be affected include the following countries: Indonesie, Papua New Guinea, Singapore, Malaysia, Cambodia, Vietnam and Philippines.

Since last month this area was already hit by nine huge earthquakes, yet hundreds of aftershocks show that this region is very unstable. The Philippine Atmospheric, Geophysical and Astronomical Services Administration or PAGASA issued a warning on December 23, 2016 that Nock-ten (Nina) is expected to continue intensifying and reach typhoon strength on approach to the Philippines by December 24, 2016 before making landfall over Catanduanes by Sunday, December 25, 2016, afternoon or evening (local time).

With the storm Nock-ten on its way and massive waves of energy are hitting earth caused by the enormous coronal hole in the sun, it is suggested by several news outlets that the earth, especially Asia Pacific, the region as mentioned above, will face severe weather and/or geological events on Christmas.