on February 28, 2017
Government agencies keep the existence of UFOs from outer space secret from the public is well known.

Most UFO encounters and pictures are classified material, which to this day have not been shown. 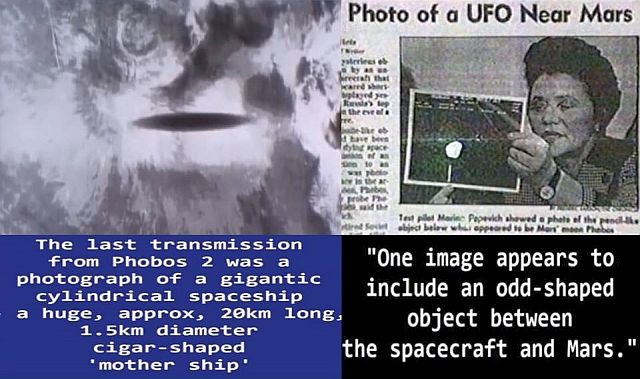 But on 28th March 1989 Tass, the official Soviet news agency reported that the Soviet mission control center lost communication with it’s satellite probe Phobos 2, which arrived at Mars in January 1989, but not before it has beamed back two images.

In July 1988, the Russians launched two unmanned satellite probes the Phobos 1 and the Phobos 2 in the direction of Mars, and with the primary intention of investigating the planet's mysterious moon, Phobos.

Phobos 2 arrived safely at Mars in January 1989 and entered into an orbit around Mars as the first step at its destination towards its ultimate goal: to transfer to an orbit that it would make it fly almost in tandem with the Martian moonlet called Phobos to explore the moonlet with highly sophisticated equipment that included two packages of instruments to be placed on the moonlet's surface.

All went well until Phobos 2 aligned itself with Phobos, the Martian moonlet.

Then, on 28th March, the Soviet mission control center acknowledged sudden communication problems with the spacecraft and Tass, the official Soviet news agency, reported that Phobos 2 had failed to communicate with Earth as scheduled after completing an operation yesterday around the Martian moon Phobos. Scientists at mission control have been unable to establish stable radio contact.

What had caused the Phobos 2 spacecraft to be lost?

According to Boris Bolitsky, science correspondent for Radio Moscow, just before radio contact was lost with Phobos 2 several unusual images were radioed back to Earth, described by the Russian as "Quite Remarkable Features".