July 30, 2017
There is always much debate about the nature of the mysterious cube-shaped objects near the sun often spotted in NASA’s satellite images. 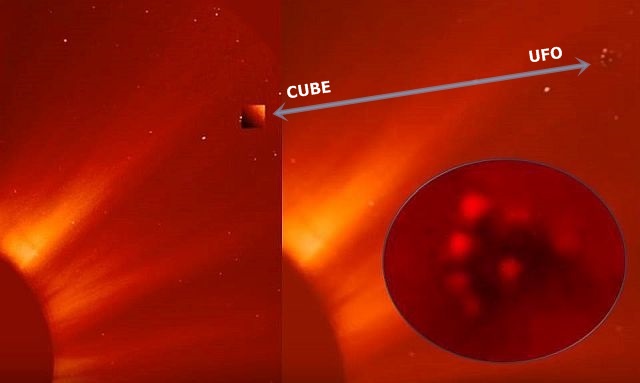 While some people say these objects are image processing errors, others believe such a cube-shaped object is in fact NASA’s way of hiding unidentified flying objects of extraterrestrial origin.

Since it seems impossible to find out if there is really a UFO behind such a cube-shaped object it will be always the question whether it is NASA’s way to hide UFOs or not.

But what if something goes wrong during NASA’s image processing and we can take a look behind such a cube-shaped object near the sun.

That is exactly what happened in 2014, when NASA accidentally revealed SOHO LASCO C2 imagery showing an illuminated Unidentified Flying Object(s) behind a cube-shaped object.