Bill Bryson states that it is not unusual for him to see similar objects at least one per session but 14 objects that fly clearly in a formation is very unusual. 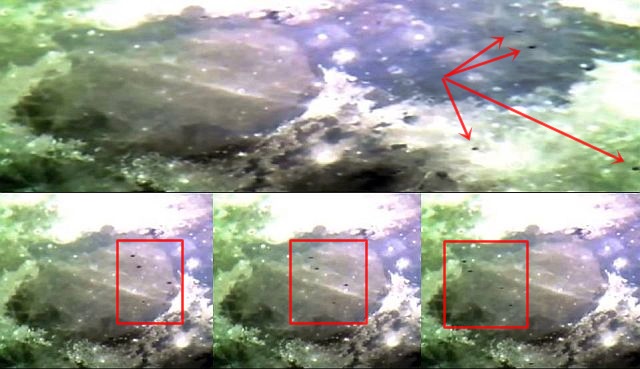 Bill: “Now I do not pretend to know really what they were - but it looks to me that either they are UFOs or Bats.”

Given that the camera was zoomed in on the moon, it is unlikely that the objects were bats, bugs or even birds as they would have been out of focus.

Besides, according to a commenter, birds fly at a speed of 25-35m.p.h. At that speed, to cross camera parallax then the birds must fly at an average altitude of 5,000 ft. But as Bill zoomed in on the moon, the camera was, say at 50,000 ft. in air, so then it is impossible that it was a bat or bird flight.

The first short (slow-motion) video of Streetcap1 shows the moment the fleet consisting of about 14 UFOs flying in formation from right to left across the screen. The second video is the longer original footage of Bill Bryson and shows the UFO fleet flying at high speed across the moon.