January 15, 2018
The following image has been captured by a photographer from Cornwall Ontario, Canada and shows a remarkable unidentified flying object that passes the moon. An object that looks like a black knight craft.

The photographer says that he has never witnessed anything like this and wonders whether it could be military, dimensional, other-worldly… 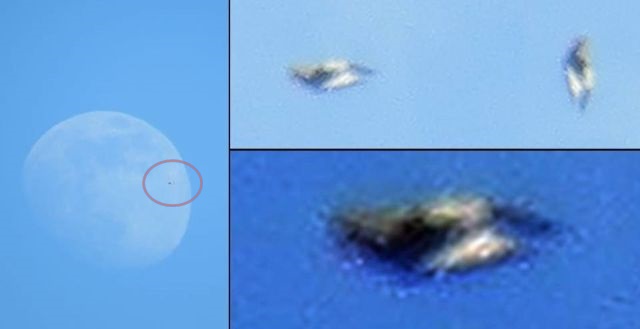 He states: I was out shooting images with my kids on the side of my house, just randomly shooting the moon and clouds. I captured images using a Canon SX60HS which has zoom capabilities allowing you to zoom in on the moons craters.

I did not notice the object while shooting, in this particular moment I was using 3 shot burst and just trying to get the circumference of the moon.

It was only when I was going thru the images when I noticed an object in view of the moon. The object seems to resemble a hat shape, likely metallic, and what I would call a disc with an elevated dome of sorts. It does not look to have many attachments at all.

I was immediately shocked by what I had captured; however, with my kids there I asked them "what do you think this is?" They all respectively said they thought it was a "UFO" or "Spacecraft". 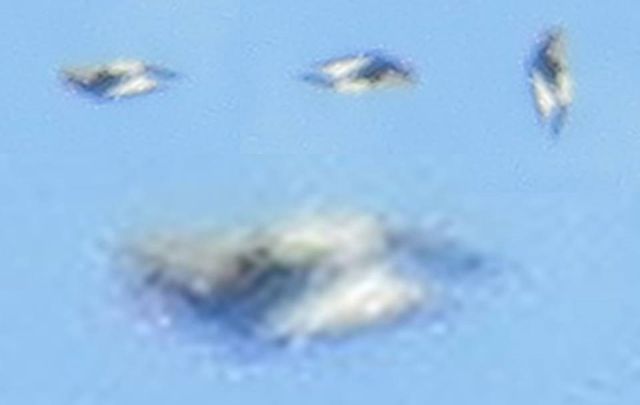 Unfortunately, this was a still image, However, there was no object in the two subsequent images, meaning it was either faster than the shutter speed on 3 burst, or it was there and gone, disappearance.

I was utterly afraid to report this object, photographed in 2015, because I did not want to be subject to ridicule, but some friends and family, who have all encouraged me to report the sighting and get my story out there. Mufon case 89578.

September 27, 2013
Seabed Researchers have found several strange shapes on the bottom of the Barents Sea, North of Norway. One of the shapes is a major '9 'of 1000 meters long, 60 meters width and eight meters deep into the seabed. "We saw hearts, shapes resembling animals or Arabic characters and illegible signatures," said Hanne Hodnesdal of project MAREANO . "The most obvious sign is probably the major 9. Also they found the shape of a huge arrow-head, almost half as large as southern Norway. Note also the 'tracks'. Hodnesdal had two years ago, when the government put money aside for the exploration of the seabed, never thought they would see something weird like those shapes. “We expected that the soil would be relatively flat" The soil was mapped with the help of sound pulses. The distance to the surface is determined by measuring the delay between the transmission of a pulse and the reception of a reflection of that pulse the time. The abov
Read more