Stunning footage of 11 UFOs moving around the Sun, 1 UFO even makes a U-turn!

December 18, 2019
What is going on? What are these huge objects moving near/above/around the sun? 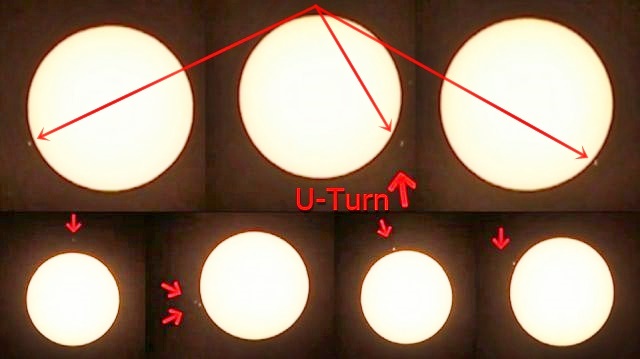 On December 15, 2019, sky-watcher Shadab Shaikh from Mangalore, South Karnataka, India was testing his camera, a Canon 700D /Canon 55-250mm with solar filter (10stop ND filter) as a preparation to film and photograph the Annular Solar Eclipse (94%) visible from Mangalore on 26-12-2019.

During the test he shot a 30 seconds video of the sun and after the clip was copied on his PC he noticed 11 circular UFOs moving in front of the sun.

Some of the UFOs appear to be moving fast and some slow. Some in a straight line and some in a curved path and one UFO even passes the sun, then makes a U-turn and moves back in the direction where it just came from.

What could be the reason that so many alien ships show themselves near the sun?