Aerial film of the mysterious megalithic alignments in Carnac, France

June 12, 2020
They date from around 2300 BC- 4500 BC and with more than 3,000 standing stones which were hewn from local granite it is the largest collection of megaliths on the planet that are designed in parallel lines with semicircular 'cromlechs' often at either end. Some examples stretch for several miles, now disturbed by housing and roads. 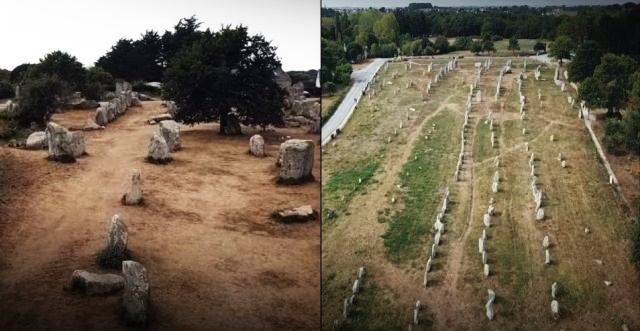 Why they were built is a mystery, but author Howard Crowhurst has decoded the geometry and astronomy of the sites in two lectures at Megalithomania:Watch here and here .
In this aerial film we fly over several sets of the mysterious megalithic alignments in Carnac and the surrounding areas in northwestern France- five examples: the famous (and largest) Menec alignments, the Kerlescan Alignments, the Kerzerho Stones at Evdeven, Saint Barbe Alignments at Plouharnel and the Kerbougnec Cromlech and St Pierre Alignments near Quiberon.