Rare Giant Creature Of The Deep washed op on the shore in Western Cape, South Africa

June 15, 2020
It is very unusual to see a giant squid as they live more than 3,000ft below the surface of the ocean, but now such a creature of the deep washed up on the shores of Britannia Bay beach in St Helena Bay, Western Cape in South Africa on June 14, 2020. 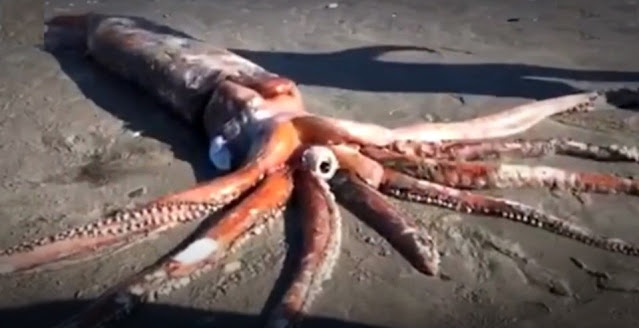 According to dailymail, despite this squid weighs 440 pounds, 14 feet long with tentacles of about 8 foot long, they can grow up to an terrifying size of 43 feet long.
Seeing a giant squid is extremely rare since they having never been photographed alive before 2002, and only being filmed for the first time in 2006.
So far, it's unclear what led to the creature's demise.
The stunning footage below was captured of the washed up creature of the deep by eye witnesses.