NASA spacecraft on standby to grab some pieces of Asteroid Bennu

September 26, 2020
A historic moment is on the horizon for NASA’s OSIRIS-REx mission. In just a few weeks, the robotic OSIRIS-REx spacecraft will descend to asteroid Bennu’s boulder-strewn surface, touch down for a few seconds and collect a sample of the asteroid’s rocks and dust – marking the first time NASA has grabbed pieces of an asteroid, which will be returned to Earth for study. 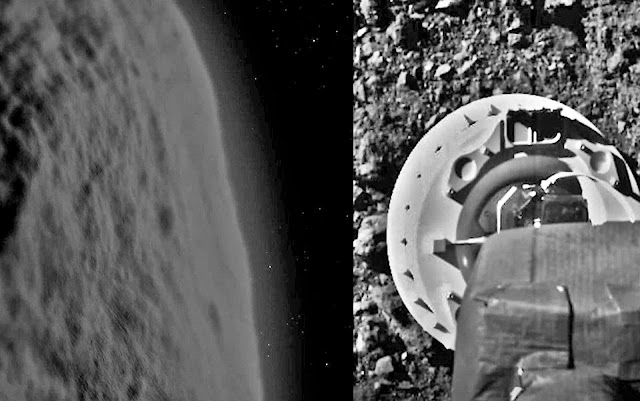 On Oct. 20, the mission will perform the first attempt of its Touch-And-Go (TAG) sample collection event. This series of maneuvers will bring the spacecraft down to site Nightingale, a rocky area 52 ft (16 m) in diameter in Bennu’s northern hemisphere, where the spacecraft’s robotic sampling arm will attempt to collect a sample.
Site Nightingale was selected as the mission’s primary sample site because it holds the greatest amount of unobstructed fine-grained material, but the region is surrounded by building-sized boulders. During the sampling event, the spacecraft, which is the size of a large van, will attempt to touch down in an area that is only the size of a few parking spaces, and just a few steps away from some of these large boulders.
To ensure that the spacecraft touches down on a safe area that avoids the region’s many boulders, the navigation system is equipped with a hazard map of site Nightingale, which delineates areas within the sample site that could potentially harm the spacecraft.
If the spacecraft’s NFT system detects that it is on course to touch one of these hazardous zones, the spacecraft will autonomously wave off its approach once it reaches an altitude of 16 ft (5 m). This keeps the spacecraft safe and allows for a subsequent sample collection attempt at a future date.
OSIRIS-REx is charged with collecting at least 2 oz. (60 grams) of Bennu’s rocky material to deliver back to Earth – the largest sample return from space since the Apollo program.
The spacecraft is scheduled to depart Bennu in 2021 and it will deliver the collected sample to Earth on Sep. 24, 2023.