November 05, 2020
Recently, a UFO Fastwalker moving extremely fast at high altitude was captured from a northward pointing Nest camera in the backyard of a home in Abilene, Texas. It looks like the UFO in the last frame finished its flight path, and disappeared into a portal. 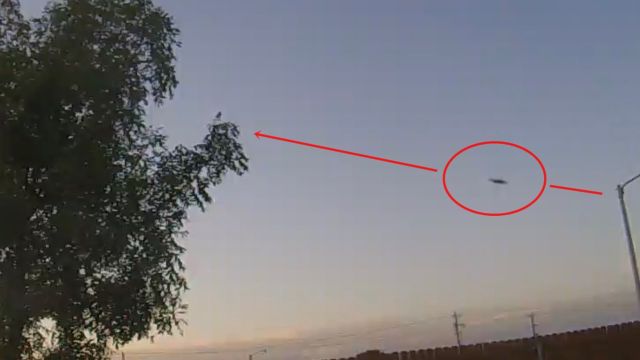 Besides the above mentioned UFO Fastwalker sighting, the same Nest camera captured a second UFO Fastwalker, three days earlier.
Witness: The UFO Fastwalker captured three days earlier appears out of a spot that appears suddenly and then as the spot it exited from, disappears, it creates and enters a new spot or portal that it hits directly.
The portal slowly dissipates in place afterwards. This situation happens in a fraction of a second and on the camera recording it is only a combination of about 6 frames or so. If the object was 20 ft across for example, it would have to be at least a few hundred feet above the ground.
Both events were high speed and the object that we caught in the Nest camera feed on October 18, was first a bright circle and in the next moment was a grey color as if it was engulfed in a sort of fog before entering the portal or point that had manifested.
At that point the spot disappears slowly in the next frame or two. One important fact that I noticed upon further review is that an upright dark grey or black cylinder shape happened to slowly appear and dissipate to the east, right before the event. This seemed to be around a quarter mile to the east of it from what I could tell.
To add to my credibility, I am active duty Air Force and have seen many aircraft flying during the day and night from multiple deployed locations and stateside bases. Nothing I have seen is anything like what we captured on the camera. Mufon report here.